About two weeks ago, my book King Stud was published, and for about an hour I was just like this:


Yeah, I was just that excited. Sadly, though, the euphoria didn't last. I mean, book promotion can be fairly time consuming, but it is fun to get out and meet new readers. No, there was one thing that brought me down to earth faster even that writing an unimaginable number of blog posts. You wanna know my biggest buzz-kill?

King Stud is the first in a five book series about the O'Connor family. I know which O'Connor kid will star in each book, who they'll fall in love with, and the order of their stories. I even know the book titles!

The problem is the writing. I can think of ways to make a series out of every book I've written, but I've never actually done it before. (So if you're looking for a post where some real experienced writer with seventeen series under her belt tells you exactly what to do....um, sorry. I'll make it up to you. Promise.)

We've all read series where characters or events morph from one book to the next. You know, that, "wait a minute" feeling you get when something bumps you out of the story and you have to dig through the previous book to figure out if there's really an inconsistency or if you're just crazy.

Probably you're not crazy.

Rather than talk about How I've Done It Before, I came up with the top three things I'm fretting over as I approach writing the next book, and how I plan to deal with them.

When I finished King Stud, I knew that Ryan's eyes were blue and Dani's were hazel/green and Ryan drove a black Ford F250 and Dani drove a white Mini Cooper. Those are pretty important details, but there were others - minor characters' names, dates in the timeline - that got a little bit foggy in the time between finishing the project and getting it published. And now that I'm starting book two? Foggier still. No one can keep it all in their head, so here are some strategies for maintaining continuity between books.

So how many times have you picked up the fifth book in a series and thought, "yeah, they shoulda quit at number four"? Because not every premise/character/theme can sustain an endless number of books. Once an author tosses a story out into the universe, it belongs to the readers, and their affection for the characters can motivate an author to keep writing. Authors love their characters, too, and that can keep them pushing past the freshness date.

So how am I going to sustain the energy for the five books I have in mind? There's a couple plot lines in King Stud that won't be entirely resolved until book five.  Each book will stand on its own, with storylines that reach a satisfying conclusion, and some lines will carry over two or even three books.I don't want to give the big ones away yet, but if I get it right, readers will keep coming back to see how it all works out.

And then, that's it. Finished. Done. I can see a couple possible novellas involving side characters, but there are only five O'Connor siblings, so when they each have a book, I'm on to the next project.

And here's where the irrational terror sneaks in. I've done a fair amount of planning already. What if the characters insist on taking the story in a completely different direction? What if my ideas don't work? What if? What if? What if?

The only strategy I have to deal with this is simple.


Butt In Chair, Hands On Keyboard. Get the words on the page. Which I'm going to start doing. Any minute. As soon as I'm done hyperventilating.

I expect to learn and grow as a writer, so my approach to book five, Queen Bee, will be different than when I wrote King Stud. It's all a process, but in the end, I expect to be as happy as Johnny Karate down there. Family is important to me, and so is acceptance and open-mindedness. I've got four more books to explore how those themes work in the world of The O'Connor Family.

I know there's stuff I haven't thought  of yet, so if you know what you're doing with series writing, feel free to leave me ideas in the comments. Cheers!
Liv

If I've whetted your curiosity, here's a peek at King Stud's cover... 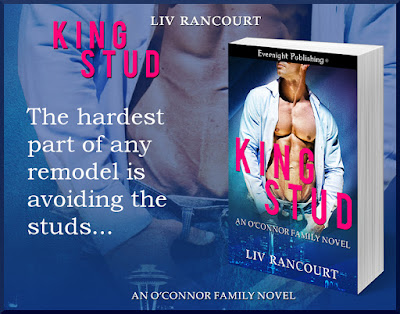