With the advancement of the interwebs and social media, the publishing world has exploded with opportunities for aspiring authors to get their work in front of editors and agents. Sure, the tried and true query method still works. But gone are the days of mailing off a sample of your manuscript and waiting six months to a year to hear back.

Oh wait, I lied. Some agents and pub houses still take six months to a year to give you a response. And then, it's most likely the ugly form rejection letter via email. With the influx of querying via email, those poor agents and editors are often inundated with queries. Some getting up to 10,000 a year! And having friends on both ends of the spectrum, I now understand the necessity of the form rejection. 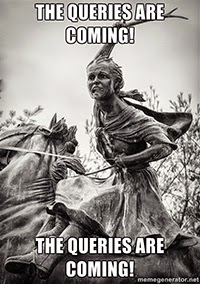 So, what's a poor author to do to get your work in front of those amazing agents and editors?

Well, here's one idea we can explore today....contests. But, where do you find a contest? Your biggest asset in today's day and age is social media. You will find out all about the many contests you can enter. Now, beware. Not all contests are created equal. 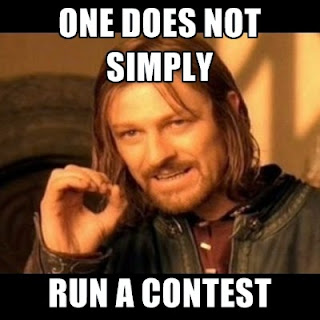 Do your homework. Research your options. <----you just knew I was going to throw that in there, didn't you.

There's partial manuscript contests that you can pay to enter a sample of your work, usually the first 5000 words or so. A lot of these are done by RWA (Romance Writers of America) chapters, and they use the entry fees to help support their chapter. So it's a good investment because your partial will be seen by a number of pubbed and aspiring authors in the first round. And if you're lucky enough to make it to the next, your manuscript will be seen by agents and editors!

There's also the free contests around the world wide web. There's query contests, first 250 word contests, Twitter pitch contests. The big daddy of them all, Pitch Wars, run by the immeasurable Brenda Drake, is one you should definitely have on your radar.

Query Kombat, Pitmad, Pitchmadness, Pitchmas, Nestpitch, Sun vs. Snow, Nightmare on Query Street are just a sample of the great contests that you can enter!! Now some of these may have already passed for this year, but keep them on your radar for the next submission period so you can prepare. 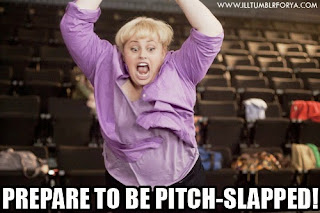 So, that being said, each contest has it's own rules. Some require just a 140 Twitter pitch, like Pitmad. Some require a query and the first 250 polished words of your manuscript. Some require a 100 word blurb only. Some are query only. 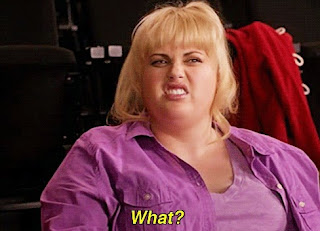 Yeah. What's the difference between a blurb, a pitch, a query?

Well, let's see if we can dissect that.

A query is what you should always have at the ready for your book baby. You'll need it pretty much no matter what avenue you're taking to get in front of an agent or editor. There are so many websites, books, seminars on how to write a good query. The best place I can recommend is Janet Reid's Query Shark blog.

But here's an example of a query from my own WIP, my Space Opera entitled CLANDESTINE CHAOS. I've entered this before in a few contests so if you've run the circuit you may have seen it before.

Pre-med student Kadence Murphy's sole mission in life: get out of college and into scrubs. Struggling with a hormone-surged roomie, a two-timing almost boyfriend, and financial aid problems, the only thing keeping her from shivving someone is her part-time job in the campus library. She discovers a cryptic book that entwines its storyline with reality.

Kadence drops into Captain Jeremiah Colt's lap, interrupting his latest effort to redeem his floundering business. Now stuck on a dysfunctional transport-ship, Kadence learns she’s in an alternate version of 2013 where Earth collapsed as a result of a global meltdown from Y2K. The survivors took to the skies in an attempt to colonize and sustain human-life on other planets.

Colt itches to dump her aggravating hide on the first planet they come to. Kadence can't last five minutes in his presence without the driving need to stab him with a spoon. A fierce attraction lies beneath their bickering, making Kadence rethink her quest to get home. But a mutinous crew member has other plans, none of which include Kadence, and he isn't above murder to get rid of her.

Now, that's the meat of the query and it's all of 185 words. Agents/editors view so many queries a day, if you can't capture their attention in less than 250 words, you're out the door with a form rejection. So keep it succinct, short, and captivate them to read more. Goal is to keep it around 250 words tops, including your bio & writing credits and cat/genre/word count. 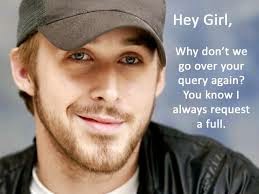 Do not try and turn your query into a full synopsis and hit every plot point and character arc in your story. You want to merely engage the person to request more to read, not shove it down their throat in one fell swoop. You're only asking for a rejection that way. 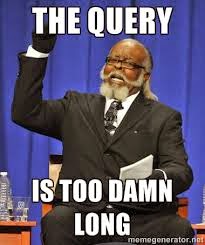 Ok, well what about a blurb? How does that differ? 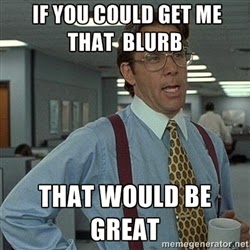 Think of a blurb as the back cover info on a book. Short, succinct, overall pitch of the book to make you want to read it. Often it's about 4 or 5 sentences, tops. Something you can recite off the top of your head, not have to write it down to remember.

Pre-med student Kadence Murphy discovers a book that entwines its storyline with reality. She drops into Captain Jeremiah Colt's lap, interrupting his latest heist, finding an alternate version of 2013 where Earth collapsed from a global meltdown duringY2K.

Colt itches to get rid of her as soon as he can. Kadence can't last five minutes with him without the driving need to stab him with a spoon. A fierce attraction lies beneath their bickering, making Kadence rethink her quest to get home. But a mutinous crew member has other plans and isn't above murder to get rid of her.

So you start with your 250 word query and narrow it down to the meat of the story. Hit the high points, inciting incident and what's going to make us want to read it? Leave all secondary characters out of it, you can hint at them but stick with the names of only your protag or hero/heroine. What is their goal? What are the stakes? They must be clearly defined.

Stay away from hypothetical questions in a query, pitch, or blurb. IT IS KRYPTONITE! 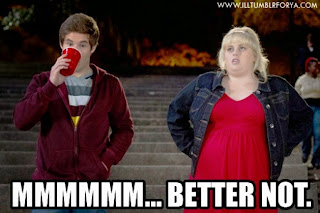 Ok, so then there's the Twitter pitch. You think you have 140 characters to play with. But in reality it's actually less, because often times in a Twitter Pitch party you have to include a hashtag for the agents to peruse like #pitmad, #pitchmadness, #adpit etc. And many require you to put in the category and genre. So you have to get creative. There's some rules here to strictly follow in a Twitter pitch:

1) DO NOT spread your pitch over 2 or 3 tweets. Those hashtags move so fast your first tweet will end up being 140 tweets away from your second. Also, don't make the agent work for it, you need to capture their attention in one tweet.

2) DO NOT try and short spell stuff like 4ever, 2gether, 2night etc. While it helps shorten your tweet, it looks like a damn text message to your bae. It's unprofessional and hard to read. It sucks having to condense your 80,000 word novel into 120 characters. But it can be done. You're the author, get creative.

3) Always have multiple versions of a Twitter pitch. One may not catch a person's eye, but maybe another one of yours will. It's good to change things up and have at least 3 or 4 if you can.

So here's some examples of Twitter pitches for CLANDESTINE CHAOS:

Kadence falls into an alt timeline. Colt can't decide if he wants to kiss or kill her. A mutinous crew member may do it for him. NA #pitmad
Losing yourself in a book has new meaning when Kadence's reality is entwined w/one. Colt wants her heart someone else wants her dead #RTSlap
Firefly meets Outlander. A book dumps Kadence in an alt timeline. Stuck in space, the one man who can help her she wants to kill. NA #PitMad

Hopefully you can take this knowledge into the universe and use it for good instead of evil. May the pitches be with you! 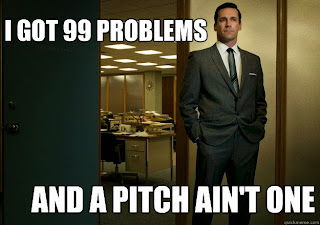