Drowning in Heroes and Abs

Which trends have started getting worn out?

Trust me, this is not just an excuse to post a few pictures of the Avengers! I  promise! However, I might as well get this over and done with. Boom:

Don't get me wrong. I'm a huge fan of all things Whedon and the dark brilliance of Marvel and flawed superheroes and the swarthy Avengers. I've seen all the films and I've enjoyed all too, including the most recent. However, at about 15 minutes in to the latest installment, when someone made another joke about Cap's good manners, I did find myself stifling a brief yawn! Inconceivable in the earlier films! The narrative did eventually pick me up and whisk me away on an adventure for which I thank it! Essentially though I realised that the Avengers series is going to have to introduce something different or snazzy to keep me hooked next time, because I'm slowly getting over the need to watch the Avengers. Again, I'll no doubt watch the next, but I'll certainly be less glued to the screen. All this because I've just watched so many of them and the novelty is wearing thin. I get easily bored when there's a glut of the same kind of story.

Which book trends are wearing thin?

Personally, and of course we will all differ on this as we've all drowned in different seas, I'm getting a little bored of dystopian fiction. The fact that I am typing this horrifies me, but it's true! I was raised on dystopia and wrote my thesis on it, too! However, it's true. I'm kind of over it. I was hooked on Orwell's '1984' and Atwood's 'The Handmaid's Tale', then I was intrigued by 'The Hunger Games' and then mildly amused with 'The Maze Runner' (1st book at least) and now a bit worn out with all of them. Whether the dystopian fiction is by a literary giant like Huxley or an edgy writer like Zamyatin or a more recent bestselling author like Suzanne Collins, they all serve a purpose and I would like to be able to appreciate them all! Dystopian worlds are an excellent setting for some truly intriguing stories. However, at the moment and to me at least, a controlled society with a rebellion are the literary version of donning a cape and flying off to save the world. That is to say, they've been overdone. Cinema has superheroes and TV has psychokillers in every town and BOOKS have creepy dictator states.

Rather than being all negative about a genre I love, I am pushing myself to read some different genres that I don't usually go for and I noticed some predictions for the next big trends in books.I read an article that told me that con-artists and the like would be the next big thing. Another blogger said that fairy-tale re-telling (despite already having been big of late) will have another boost.

However, the trend that I'd like to see in 2015 or 2016 (I'm patient -  I can wait) is some more hard sci-fi. I've really been enjoying all the fantasy about and the dystopian fiction and the fabulous supernatural deluge over the last 10 years, but now I'm ready for some sci-fi with a tighter connection to realistic consequences and scientific accuracy. Even if the science is quite imaginative, I think it'd be refreshing to see more detail on the social impact on some of these fabulous worlds.

So, here are 2 books I recommend to get someone into hard(er) sci-fi:

This is an epic undertaking to read so I can't imagine how overwhelming it must've been to write. Robinson shows us multiple perspectives of the people of Mars tera-forming a new world for themselves. It is a balanced and interesting read on what could happen if we have to leave the Earth. 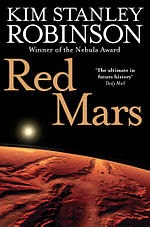 2. "The Quantum Thief" by Hannu Rejaniemi

This book can be hard work in places but it is dazzlingly worth it! You meet a master thief in a world where humans aren't exactly human anymore. Rejaniemi shows this world where memory can be toyed with and therefore not trusted and the social effects around it. 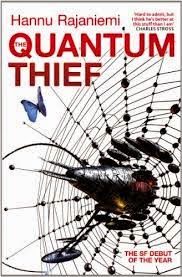 And, let's face it... if you haven't already, you need to read some Asimov!