The Rhythm of a Good Book

I don't know if I've mentioned this before, but I just so happen to be a voracious reader. I'll read almost anything (well, mostly fictional unless study- or work related, but still).

It was one of those books one is almost compelled to pick up - not because of the author's world-wide  fame, or the books stellar reviews (no pun intended in this case, honest) - quite frankly it's not a book you've heard of as yet. One picks up books one knows nothing about under the influence of too much travel fatigue, a steadily growing level of annoyance and plain old boredom whilst waiting for a very, very late flight connection.

It has a bright cover, you see. Rather hard to miss amongst pastel-coloured book jackets covered in curli-cu-cute writing. So pick it up I did... and in the two hours I was at the airport, plus one hour on the plane, and then until 3am once I was home, I read this book.

I simply could not put it down. It's been a while since a book captured my interest like this, and oh, how I love that feeling!

Then a couple of days later I stumbled across a post on one of my favourite geeky websites (www.io9.com) that said The Martian is going to be a movie! OUT THIS YEAR!!! (yay!)

Isn't that the basic structure of most books? Putting the hero through a series of trials, one feeding off the other, to bringe it all to a great climax? And then I realised the problem. This particular reader had missed the overall rising tension that permeated the story (probably because he missed the fact that the mere reading of logbook entries written by a protagonist does not prove that he or she in fact survived the whole ordeal). 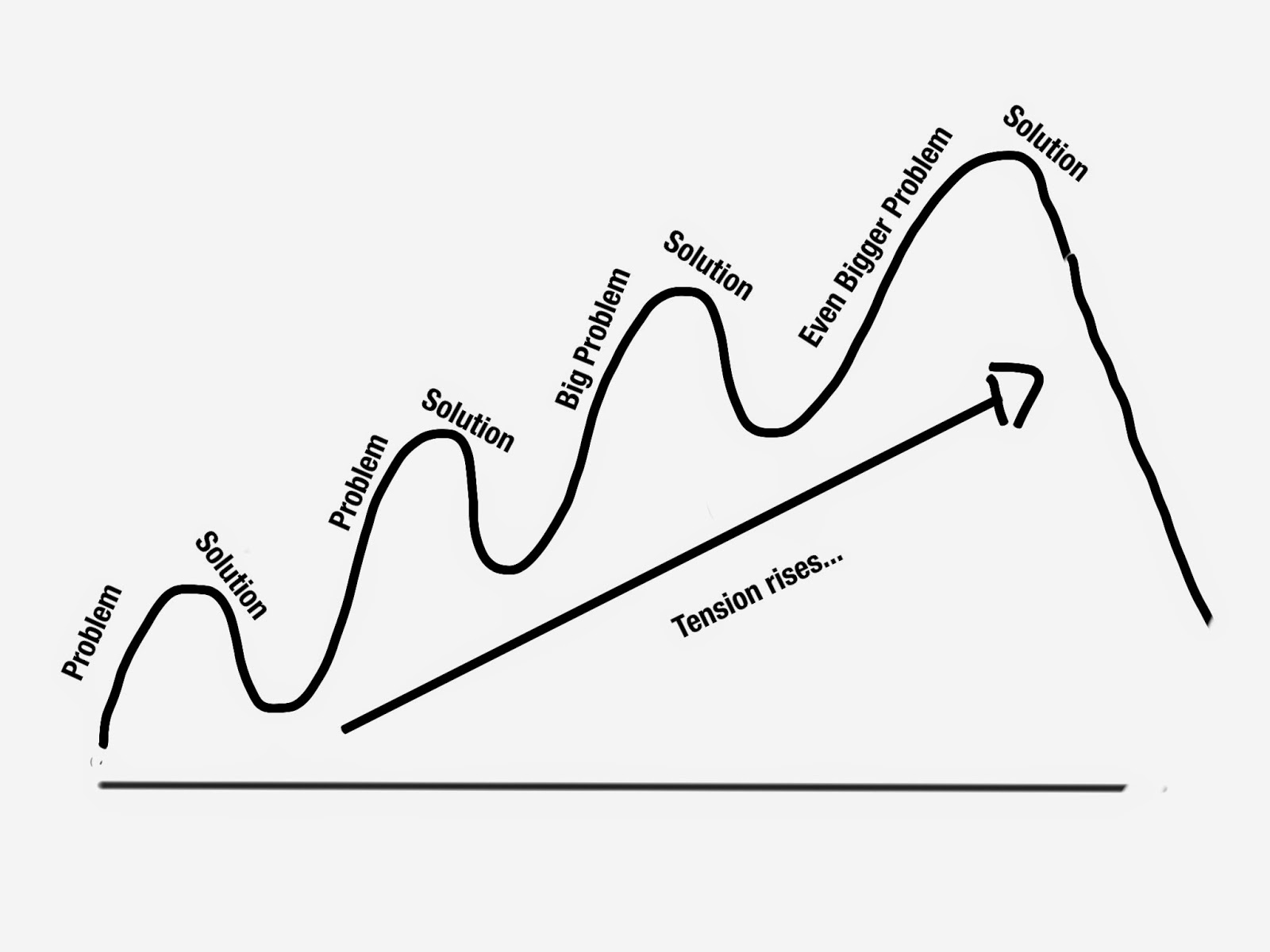 The tension rises and rises, problems keep cropping up, solutions have to be clobbered together, and then, finally there's the BIG PROBLEM, the one that beats them all, the one whose solution (in the case of The Martian, at least) is a matter of life or death. It is certainly a matter of grave importance to the protagonist in most cases, perhaps for a whole group of people, or, for a real bummer, a question that decides whether the world will end or not. 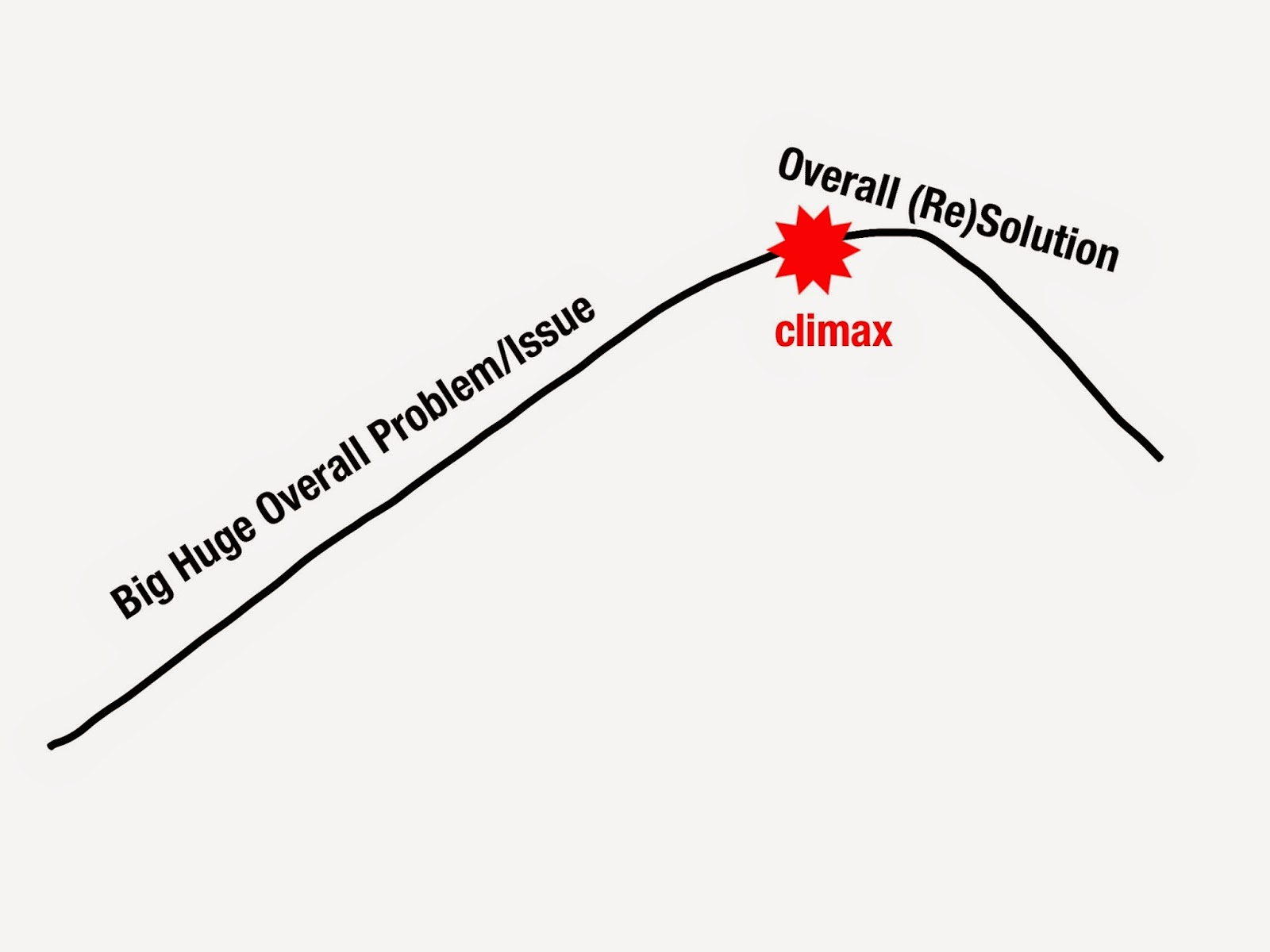 The climax is the moment the whole book works towards, either resolving a physical crisis or perhaps a crisis of conscience. The climax, that breathless all-deciding moment, is usually followed by an 'ah' moment of relief (if the resolution is favourable) or despair (if it isn't). Rarely do books get away with stopping right after the climax. Most readers REQUIRE a resolution of some kind, though it does not need to be a very long one (depends on your story). If you don't resolve the overall story problems, it's highly likely that the reader will feel cheated in some way. I know I do when I come across that sort of story (rabbit-out-of-hat solutions are also in some disfavour these days).

And you know what? I can't think of a single story that does not have this sort of basic rhythm. One problem followed by a solution followed by another problem that may or may not build on the first one (or perhaps the solution of the first). Actions have consequences, after all, in real life and in books. The overall issue weaves in and out of these 'temporary' problems, but it's always there, pushing the protagonist onwards, forwards, towards the climax and the eventual resolution of the story.


This, then, is the very basic rhythm of a good book.

If you ask me, that is. Do you agree? Do you see stories as a succession of tension and relief, building up to the big bang that has us sitting at the edge of our seat, turning pages with nary a blink of an eye in between? Or are you of the opinion that one can't find such a basic structure in stories? Can you think of a (good!) story that does not follow this sort of rhythm?